Tulips: A Turkish Present to Rest of the World 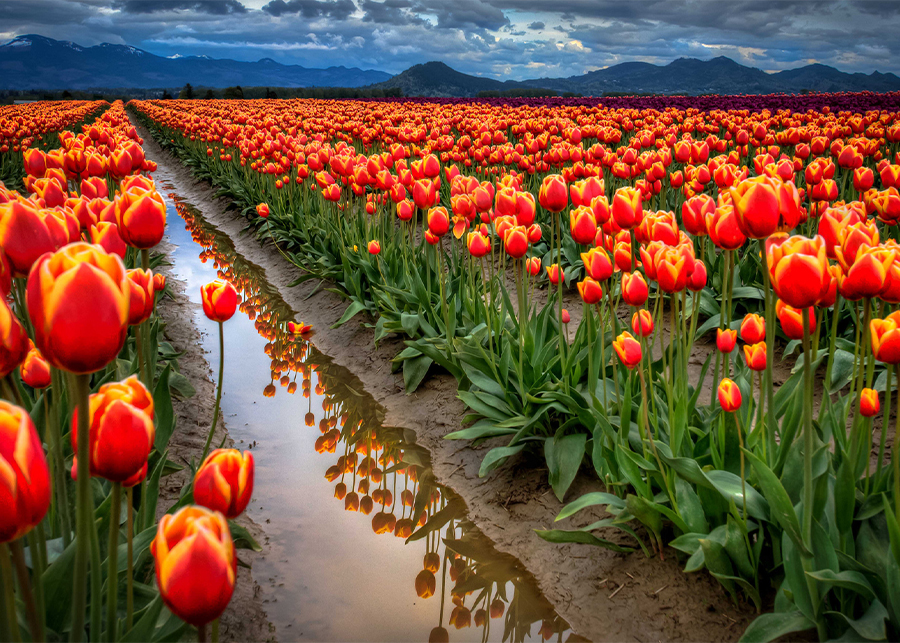 The tulip is one of the most iconic flowers in the world. From its vibrant flowers to its Turkish origin story, this flower has delighted people all over the world for centuries.

Every year, tulips bloom all over the Netherlands, thanks to the country’s temperate climate and rich soil. Tourists from all over the world flock to see the colorful display of flowers that stretch as far as the eye can see. But where did these beautiful blooms come from? Turns out, they have a Turkish origin story. For centuries, Turks have been gifting tulips to loved ones as signs of appreciation and affection. And now, this iconic flower is enjoyed by people all around the world. If you’re looking for a touch of Turkish culture in your life, look no further than the tulip!

What Is a Tulip?

Tulips (Tulipa) are a genus of spring blooming perennial herbaceous bulbiferous geophytes (having bulbs as storage organs). The flowers are usually large, showy and brightly colored, generally red, pink, yellow, or white (usually in warm colors). They often have a different colored blotch at the base of the tepals (petals and sepals, collectively), internally. The flower is a member of the lily family, Liliaceae, along with 14 other genera, where it is most closely related to Amana, Erythronium and Gagea in the tribe Lilieae. The name “tulip” is thought to be derived from a Persian word for turban, which it may have been thought to resemble by those who discovered it.

They were first cultivated in Constantinople as early as 1055 and have since spread throughout much of the Near East and Central Asia. They were one of the most prized flowers by the 15th century; they became known as the Turks’ emblem. The flowers were not discovered by the West until the sixteenth century, when Ottoman diplomats to Western courts observed and recorded them. They appear in European art around this time, after many centuries of being cultivated in Persia. They were quickly introduced into Europe, where they became a frenzied commodity during Tulipmania. They have been frequently represented in Dutch Golden Age paintings since their introduction to Europe and have become linked with the Netherlands, the major world supplier.

Cultivation, History and Usage of Tulips:

Cultivation of the flower began in Iran (Persia), probably in the 10th century. Tulips have been cultivated in mountainous regions with a temperate climate since ancient times. They are a typical component of steppe and winter-rain Mediterranean vegetation, which is why they are found on the slopes of mountain ranges. They thrived in regions with long, cold springs and dry summers. Tulips can be found in meadows, steppes, chaparral, as well as cultivated fields, orchards, highway sides, and fallow gardens.

In the Ottoman Empire, many different kinds of them were cultivated and developed, and today, there are still 14 distinct types in Turkey. However, only four of the 14 tulip varieties known to have originated in Turkey are considered native, so wild tulips from Iran and Central Asia may have been introduced during the Seljuk and especially Ottoman eras. Omar Kayam and Jalal ad-Din Rumi wrote about these flowers.

It’s been said that shortly after arriving in Constantinople in 1554, Ogier Ghislain de Busbecq, an Austrian Habsburgs ambassador to the court of Suleyman the Magnificent, announced to have brought the tulip to Europe by sending a shipment of bulbs west. Its rise to prominence could be attributed to the fact that its first recorded journey west started in one palace and ended in another.

In the final years of the sixteenth century, Carolus Clusius was largely responsible for the spread of the bulbs. He introduced them to the Vienna Imperial Botanical Gardens in 1573. He planted a tulip bed in his garden after he was named director of the newly founded Hortus Botanicus at Leiden University in late 1593. The year 1594 is widely recognized as the year when the first tulip bloomed in the Netherlands. These Leiden tulips would eventually lead to both the tulip mania and the Dutch trade. The Netherlands is the world’s main producer of commercial tulip plants, producing as many as 3 billion bulbs annually, the majority for export.

They are cultivated by planting the bulb in well-drained soil. The bulb will grow a flower stem and flowers. After the flowers die, the leaves will die back and the bulb will store food for the next year’s growth. The time it takes for seeds to germinate and produce blooms varies considerably. Most tulips bloom in two to three years, depending on the variety and growing conditions. Some varieties of cauliflower can take up to four years before they are ready to flower.

Cross-pollination is prevented by increasing the bulb growth rate and boosting the vigor and size of offsets, as well as topping flowers and stems on a field of commercial tulips with big tractor-mounted mowing heads. Individual specimens can be pruned and trimmed to fulfill the same objectives as a commercial grower. The tulip bulbs are normally harvested in late summer by commercial growers, who grade them into sizes; bulbs that will flower are separated and sold, while others are sorted into sizes before being replanted for future sale.

Some people choose to deadhead (cut off) the spent flowers so that more nutrients can be put into developing new flowers. This process must be done regularly during the growing season to be effective. Fertilizer can also be applied at this time to promote healthy growth.

Tulip bulbs do not always produce again the following year, thus tulip cultivars that lose favor with contemporary aesthetic trends have generally vanished. The Tulip’s historical forms do not survive alongside their modern versions, unlike other flowers that are unable to do so.

The petals are edible. The flavor varies by variety and season, but it’s comparable to lettuce or other salad greens. They cause an allergic reaction in some people.

The bulbs resemble onions, but they should not be considered food. The toxicity of tulip bulbs is unknown, and no protocol for preparation has been established. Depending on how many bulbs are consumed, people have gotten ill. Tulip bulbs were eaten out of hunger during the Dutch famine in 1944–45, and Dutch physicians supplied recipes.

Are tulips originally from Turkey?

Many assume that tulips originated in Holland or some other Northern European country. This is true, but they were actually first cultivated in Central Asia. And, even though the Dutch were responsible for the widespread popularity of this amazing flower, the Turks deserve credit for “discovering” and cultivating the tulip long before anyone else.

What do tulips represent in Turkey?

The tulip has become an integral part of Turkish culture, as well as a cultural symbol, a national heritage and a unifying symbol in the midst of increasing globalism. The flower can be seen, felt and celebrated all throughout the country, all year round. Its symbolic meaning is universal, making it the perfect way to promote Turkeyâ€™s image on the world stage.